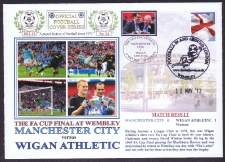 This is the FA Cup final cover for 2013 when Wigan Athletic became the first ever club to win the Cup and be relegated at the same time. An event even more amazing when Manchester City were the 2012 Premiership champions. A small number of the scarce Welsh and Scottish regional stamps have been used.  Some covers even have the red first class stamp attached to the FA 150th Anniversary label (only one exists in each Prestige book of stamps)